Broward County school officials and witnesses say one child was killed and three others were injured after their school bus crashed in Coral Springs. 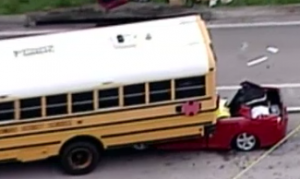 The Broward County school district and the Florida Highway Patrol officials says a bus carrying 42 students from Hillsboro Beach had crashed. Aerial video showed the bus lying on its side in a ditch with its rear half showing scorch marks.

The Florida Highway Patrol say a power line struck by the bus ignited the fire, but the exact cause of the wreck remains under investigation.

The 38 other students were returned to the school where counselors met them and their families. The Florida Highway Patrol officials said they are still trying to determine if the accident was caused by either drugs or alcohol. No charges have been filled yet, according to The Post.

Accident attorney Jason Weisser of Schuler, Halvorson, Weisser, Zoeller and Overbeck responded to this unfortunate crash. “This is a serious accident involving a school bus, which ultimately, resulted in the death of one child. We hope the investigators can quickly determine what caused the accident. Please be careful and obey the speed limits whenever you are driving a motorcycle, car, SUV or truck. We hope that all parties involved consult with an experienced trial lawyer. If you have been injured in an accident, call my office for a free consultation and find out what your rights are.”