A mix of alcohol and marijuana likely impaired a 28-year-old man, causing him to lose control of his car, side-swipe a tree, hit a second car and abruptly ended the life of one of his passengers. 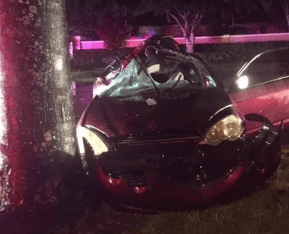 A judge ordered the man held on $160,000 bail. If he posts bond, he won’t be allowed to drink alcohol, take drugs or drive. He will also have to wear an ankle monitor, FHP said.

“I’m sure this is a sad day for you,” FHP said to the man’s mother.

The man was driving a 2005 Cadillac CTS on Overlook Road near Hypoluxo Road. He was driving at about 80 mph in a 35-mph zone and lost control of the car, Palm Beach County Sheriff’s investigators said.

The car traveled on the eastern shoulder, side-swiped a tree, hit a second car and then rotated counter-clockwise while moving north. A 19-year-old of suburban Lake Worth was sitting in the right-back seat and was thrown from the car.

Five other passengers were injured but survived.

The driver of the other car was rushed to a nearby hospital.

The man’s blood alcohol content was .089, the affidavit says. The state’s blood-alcohol legal limit for driving is 0.08.