The Port Salerno man killed when a minivan jumped a curb in Hobe Sound while its driver was trying to parallel-park was a married father of two who worked at a Martin County restaurant, a devastated neighbor said. 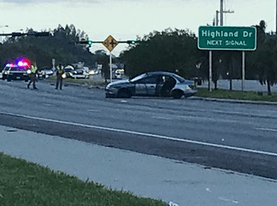 The 47-year-old said, he had seen the victim earlier in the day before he became one of eight people to be mowed down at Hobe Sound and North Shores when a 54-year-old was trying to park a 2015 Toyota Sienna.

The 54-year-old was moving in reverse on Hobe Sound when he lost control of the vehicle and mounted a curb, striking the pedestrians, police said.

A Jensen Beach resident was pronounced dead at the scene. The other victims, two of whom were critically injured, were taken to Boulevard Hospital.

The 54-year-old driver of Broward County was released from police custody after being hit with multiple charges including failure to yield to pedestrians, failure to exercise due care and unsafe backing of a vehicle.

The deceased, according to FHP, was a native of a town in China and arrived in the US “years ago and worked to bring his family here,” a friend said.