A water main break near the Mall at Wellington Green caused some traffic tie-ups Monday afternoon and led to boil-water orders for two neighborhoods.

Two lanes of westbound Forest Hill Boulevard were closed as Wellington Public Works crews worked to repair the break near the road’s intersection with Olive Drive. At one point, Palm Beach County Sheriff’s Office deputies blocked the two westbound turn lanes from Olive Drive onto Forest Hill.  They were directing traffic away from this intersection. 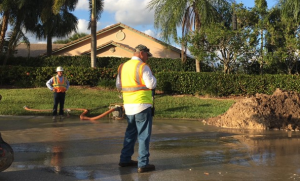 A village spokeswoman said boil water notices have been issued for the Wellington’s Edge and Polo Lakes communities.

They expect the water main to be repaired in the next few hours.

Attorney Jason Weisser of Shuler, Halvorson, Weisser, Zoeller and Overbeck responded water main break and road construction.  “Please be especially careful driving through a construction zone and any standing water.  Cases involving accidents in construction zones are always subject to heightened scrutiny because of the additional regulations. Unfortunately in our practice,  we have seen numerous instances where drivers blatantly violate these regulations, which results in catastrophic consequences”.