The occupants of the vehicle flipped on a narrow passage in Fort Pierce. 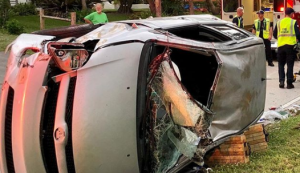 The crash took place on Monday at the 9300 block of Indian River Drive, according to Fire District officials.

A man and a woman were taken by Fire Rescue vehicles to a local hospital for treatments for their injuries.  Another passenger in the vehicle was not injured, Fire District officials said.

When officials arrived on the scene, the white, four-door vehicle was turned over on its side. The windshield was shattered in the rollover, and the roof and frame had significant structural damage.

No information was immediately available on the cause of the crash or severity of the people’s injuries.  This story will be updated when the names of those involved in this crash with injuries is released.

Officials have asked  that you avoid this area of Indian River Drive until this accident scene is cleared.

Attorney Jason Weisser of Shuler, Halvorson, Weisser, Zoeller and Overbeck comments on this accident with two injured in Ft. Pierce:  “This is a serious accident that unfortunately left two people injured.  We hope everyone can quickly find out the cause of the accident and that it wasn’t the result of distracted driving. If you’ve been injured in an accident, make sure you are properly represented by an experienced trial accident attorney.”