Two Toyota Corolla’s were involved in a crash today with injuries in Boca Raton.

The accident happened at the corner Glades Road and Highway 441.  Local first responders where were called to the scene along with tow trucks and the Boca Raton Police.

Witnesses at the scene are reporting that one of the driver’s of one of the Toyota’s is injured.  At this time it is unknown how serious the injuries are. 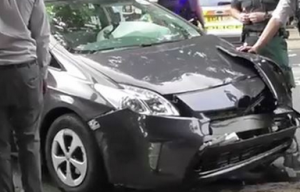 These are both busy both north/south as well as east/west commuter roads and traffic is backed up in all directions because of this accident.  The Boca Raton Police is urging all drivers to take Lyons Road as you north/south alternate and West Palmetto park road as your east/west alternate route.

Attorney Jason Weisser of Shuler, Halvorson, Weisser, Zoeller and Overbeck responded about the crash.  “Boca Raton is one of the most dangerous places in Palm Beach County to commute.  Please be careful and observe all traffic signals.  If you are in an accident where someone didn’t follow the posted signs or signals, please call my office.  We can set you up with with a free consultation”.

The post Accident With An Injury In Boca Raton Has Stopped Traffic At Glades Road And Hwy 441 appeared first on Traffic Center.