The head-on crash which happened in 1100 block of Northwest Cashmere Boulevard, involved a Volkswagen van, a Mazda, and a Nissan SUV. 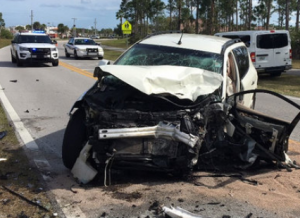 The Nissan SUV driven by a 57 year old woman was southbound on Northwest Cashmere Boulevard, about 500 feet from Northwest Peacock Boulevard, when it crossed over the double yellow line, colliding with a northbound Mazda. Then it hit a northbound Volkswagen van behind the Mazda head-on.

St. Lucie County Fire Department responded to the accident soon after it happened.  A 12-year-old boy in critical condition was air-lifted to St. Mary’s Medical Center in West Palm Beach. Two adult women who suffered traumas were in serious condition and were transported by ambulance.

The Nissan driver, which appeared to have caused the accident, was trapped following the crash and needed to be extricated by fire-rescue. She was transported to a local hospital with non-life threatening injuries. The Mazda driver, Alejandro Miranda, 41, and his two passengers — a 68-year-old woman and a pregnant 34-year-old were also transported to local hospitals with non-life threatening injuries.

The driver of the Volkswagen was 51-year-old Mario Aleus.  He was with a 13-year-old boy were taken to a local hospital with non-life threatening injuries.

Port St. Lucie Police Traffic Investigators are on the scene and are investigating the crash.  Please take alternate routes around this crash.

Port St. Lucie accident attorney Jason Weisser of Schuler, Halvorson, Weisser, Zoeller and Overbeck responded to this unfortunate crash:   “This is a tragic accident and especially sad because all of the people injured.  It appears that it was caused by a driver traveling the wrong way on road.  We hope for the families sake that it can be quickly discovered what the cause was.   Please be careful whenever you are driving a motorcycle, car, SUV or truck. We hope that all parties involved consult with an experienced trial lawyer.  If you have been injured in an accident, call my office for a free consultation to find out what are your rights”.