A Lake Worth couple was killed in a violent multiple vehicle crash at an intersection in Delray Beach. The husband and his wife have been identified as Andre DaSilva Brito and Vivian Brito respectively. 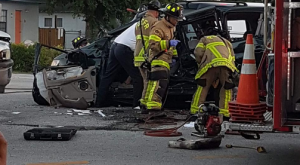 The violent multiple vehicle crash happened at the intersection of Atlantic Avenue and Hagen Ranch Road.

According to the Palm Beach County Sheriff’s Office, the couple who were traveling in a 2015 Mazda made a left turn onto eastbound Atlantic Avenue when a car going westbound struck them. The impact of the collision sent one of the vehicles into a third car.

First emergency responders arrived shortly after the crash happened. Andre DaSilva Brito and Vivian Brito were pronounced dead at the scene by paramedics. The driver of the second car is at Delray Medical Center with serious injuries.

The Palm Beach County Sheriff’s Office said the couple from Lake Worth, Andre DaSilva Brito and Vivian Brito, was husband and wife.

Investigators are looking for witnesses to the crash.

Accident attorney Jason Weisser of Schuler, Halvorson, Weisser, Zoeller and Overbeck responded to this unfortunate crash. “This is a serious multiple vehicle accident involving a couple, which ultimately, resulted in their deaths. We hope the investigators can quickly determine what caused the accident. Please be careful and obey the speed limits whenever you are driving a motorcycle, car, SUV or truck. We hope that all parties involved consult with an experienced trial lawyer. If you have been injured in an accident, call my office for a free consultation and find out what your rights are.”