A baby was rushed to the hospital after a driver lost control of his pickup truck, flipped and slammed into several trees along a median.

The crash happened along Okeechobee Boulevard just east of the Florida Turnpike.

Captain William Bruckner with the Palm Beach County Sheriff’s Office said when deputies got to the scene they did not see a car seat in the pickup truck. This means that the baby was not even safely strapped into the vehicle. 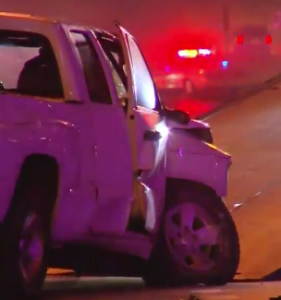 First emergency responders arrived at the site of the crash soon after the accident happened. The baby, who Captain Bruckner believes is about nine months old, was rushed to the hospital but is expected to survive.

The man behind the wheel was also taken to the hospital; his condition is unknown at this time.

This is a vehicle crash with injuries said the Sheriff’s Office.  The cause of the crash is being investigated. According to Captain Bruckner, the police are looking into this as a possible DUI investigation because when deputies got to the scene they smelled a strong odor of alcohol.

Attorney Jason Weisser of Schuler, Halvorson, Weisser, Zoeller and Overbeck responded to this unfortunate accident on the Florida Turnpike:   “This is an accident that could have been avoided according to reports.  Please always have your child in an approved child safety seat at all times.  Be careful whenever you are driving a motorcycle, car, SUV or truck.  If you have been injured in an accident, call my office for a free consultation to find out what are your rights”.