A 42-year-old man got into a car accident with a Broward County deliveryman on a bicycle in Martin County, authorities said. 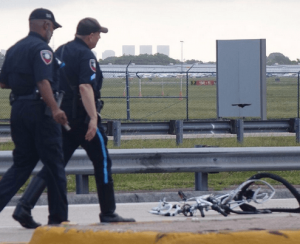 The 42-year-old was behind the wheel of a U-Haul cargo van when he collided with the bicyclist on Broadway near Eastbound Street, FHP authorities said.

The bicyclist was rushed to Delray Medical Center in critical condition. He is expected to survive.