Home  >  Uncategorized  >  Esteban Escobar, Age 32, Seriously Injured In Crash When A Lincoln Turned Into The Path Of His Motorcycle

Esteban Escobar, Age 32, Seriously Injured In Crash When A Lincoln Turned Into The Path Of His Motorcycle

Two people on a motorcycle were thrown from the bike after slamming into a vehicle in Pembroke Pines, police said.

The Pembroke Pines Police Department said officers and firefighters were called to the scene of the crash at Pines Boulevard and and Northwest 168th Avenue.

Sgt. Adam Feiner said Eugene Krug, 71, was driving a 2016 Lincoln west on Pines Boulevard when he turned into the path of a BMW motorcycle driven by Esteban Escobar, 32. 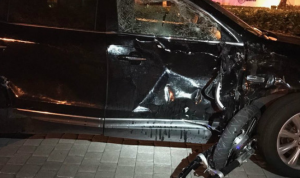 The motorcycle slammed into the Lincoln and threw Escobar and a passenger, Estefania Hoyos, 27, from the motorcycle, Feiner said.

Escobar and Hoyos were taken to Memorial Regional Hospital with life-threatening injuries, Feiner said. Krug was not injured.

Pines Boulevard at Northwest 168th Avenue are shut down while this accident is being investigated.  Pembroke Pines Police want you to take an alternate route around this crash with serious injuries.

The post Esteban Escobar, Age 32, Seriously Injured In Crash When A Lincoln Turned Into The Path Of His Motorcycle appeared first on Traffic Center.