The crash sparked a fire in two of the cars and forced crews to shut down the southbound lanes near Lake Worth Road.

Among the victims was Lisa Miller who was trapped in her car after the multi-car crash. 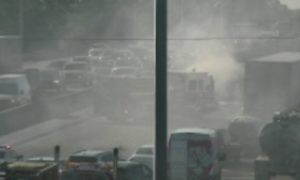 Crews found two vehicles on fire when they arrived at the scene on Florida’s Turnpike.  This happened in suburban West Palm Beach.

The fires were soon extinguished.

An update issued later by the fire service reported that the crash had involved three vehicles. The update also said that one person was trapped and was in the process of being extricated.

The fire service added that the three injured people had been taken to the hospital.

A spokesperson added: “One female (Ms. Miller) has been extricated from one of the vehicles by the fire rescue.  She was then transported to hospital by ambulance.  A husband and wife named Adam and Jill Reyes were injured in of of the cars.  The third vehicle, the one that caused the crash, was being driven by a yet to be named person was uninjured.

“Crews are in the process of trying to open all of the vehicle lanes.”

Police and Ambulance Service also attended the incident.  Two lanes on the turnpike were closed after the crash to allow police to investigate the incident.  They also had to clear the wreckage from the accident.

West Palm Beach attorney Jason Weisser of Schuler, Halvorson, Weisser, Zoeller and Overbeck responded to this unfortunate accident with 3 injured:   “This is a tragic accident here in Palm Beach County.  It is especially scary and can cause death when the vehicles catch fire.  We hope for the families sake that it can be quickly discovered what the cause was.  Please be careful whenever you are driving a motorcycle, car, SUV or truck.  If you have been injured in an accident, call my office for a free consultation to find out what are your rights”.