Vehicle Crashes Into Martin County Home At The Florida Club

A car crashed into a home in Martin County, marking the 15th crash in under four hours, reported deputies.

It has been reported that their where possible injuries from this crash.   We are waiting to hear from the Martin County Sheriff’s office for confirmation. 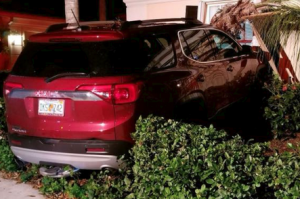 The 15th crash occurred on SW Eagle Glen in the Florida Club when a vehicle crashed into the side of a home’s garage said Martin County Sheriff’s Office on social media.

According to the Martin County Sheriff’s Office, the man lost control of his car for an unknown reason and drove through a sharp turn on SW Eagle Glen in the Florida Club. The car went off the road, through a hedge, knocked down a tree.  It then hit the garage portion of the house.

The driver, whose name has not been released, was possibly injured in this crash.

First emergency responders arrived shortly after the accident happened.  Eye witnesses saw the ambulance on the scene.  It is suspected that they are treating injured people.

An investigation is ongoing.  This story will be updated as more information is released.

West Palm Beach attorney Jason Weisser of Schuler, Halvorson, Weisser, Zoeller and Overbeck responded to this unfortunate accident with an injury:   “This is an unusual accident in Martin County.  At this time we don’t know why the driver of the car lost control and struck the house.  The drive possibly was forced off the ride by another car.  If you have any information about the crash it would be helpful to share for all parties. We hope for the family that lives in the house they they find out the cause quickly.  Please be careful whenever you are driving a motorcycle, car, SUV or truck.  If you have been injured in an accident, call my office for a free consultation to find out what are your rights”.