A 47-year-old man from West Palm Beach is injured dead after the semi recycling truck he was driving crashed into a tree, according to the Palm Beach County Sheriff’s Office.

Another car was also involved in the accident. 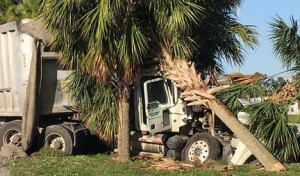 The man was headed eastbound on Southern Blvd. near the Fl. Turnpike, when the semi truck veered off the road, struck a car and crashed into a nearby tree. The car that was involved in the crash has heavy damage to it’s side.

First emergency responders arrived at the site of the crash soon after the accident happened. The truck driver was removed from the semi truck and was taken by ambulance for medical care. The car driver was also taken to the hospital; his condition is said to be serious at the time of this report. No other vehicles were involved in the crash.

This is a two-vehicle crash with injuries said the Palm Beach County Sheriff’s office. The cause of the crash is being investigated.

As at the time of this report, two lanes of Southern Blvd. are blocked heading east.

Attorney Jason Weisser of Schuler, Halvorson, Weisser, Zoeller and Overbeck responded about the crash.  “Cases involving accidents with commercial trucks are always subject to heightened scrutiny because of the additional regulations placed on drivers of those vehicles. Unfortunately in our practice,  we have seen numerous instances where drivers blatantly violate these regulations, which results in catastrophic consequences.  If you have been injured in an accident, call my office for a free consultation to find out what are your rights”.