Two of the Florida’s Turnpike lanes are closed just south of the Stuart Stuart exit after a septic tank truck rollover, according to a Martin County Fire Rescue spokesman.

The truck was traveling southbound when a tire blew, according to the Martin County Sheriff’s Office. The truck flipped over the median and into the northbound lanes. 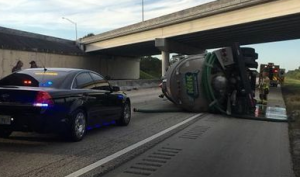 Stabile said about 20 gallons of fuel spilled and a small amount of the contents of the septic tank also spilled.

Crews were called to the incident shortly after the crash, said Fire Rescue Bureau Chief Christopher Stabile. Stabile said one person may have sustained serious injuries.  Martin County Fire Rescue said the injured person was transported to a local hospital for treatment.

All lanes on Florida’s Turnpike were blocked after the wreck, said Lt. Alvaro Feola, Florida Highway Patrol spokesman.  Since then they have opened one lane.  This is causing traffic delays. Vehicles on this route are pulling to the roadside to allow crews work. The delay of traffic on this route is due to the severity of the crash. It is best to use an alternative route.

Florida accident attorney Jason Weisser of Schuler, Halvorson, Weisser, Zoeller and Overbeck responded to this unfortunate accident:   “This is a tragic accident here in Martin County.  We hope for the families sake that it can be quickly discovered what caused the tire to blow out.  We also hope that the injured call an experienced trial lawyer.  Please be careful whenever you are driving a motorcycle, car, SUV or truck.  If you have been injured in an accident, call my office for a free consultation to find out what are your rights”.