A truck carrying packaged snacks crashed on Interstate 95, snarling traffic in both directions near Northlake Boulevard.

The wreck happened on the Northlake Boulevard exit ramp of I-95 around US Marine Corps. According to troopers, the crash involved another vehicle. 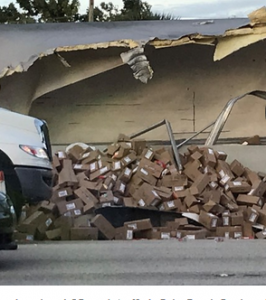 The other vehicle – a semi was traveling at a high speed when the driver lost control. The semi skidded off its lane; hit a big rig before going on to collide with a truck hauling individually packaged snacks.

The impact of the collision was so great that it ejected the content of the truck. Boxes of snacks were strewn all over the road.

First emergency responders arrived at the site of the crash soon after the crash happened.

The Florida Highway Patrol says the crash involved the big rig and another vehicle. It was reported but not verified that one person was hurt.  There is extensive damage to the highway median and a traffic light.

Crews are seen cleaning up the debris of boxes and wreckage that had been scattered all over the road. Kauff’s Towing was called in to use one of their state of the art tow vehicles to remove the semi from the road.  Witnesses commented on how fast they clearing the scene of the accident.

Traffic is moving slowly through the area but two lanes in both directions remain blocked. Those lanes are expected to reopen shortly.

Attorney Jason Weisser of Schuler, Halvorson, Weisser, Zoeller and Overbeck responded about the crash.  “Cases involving accidents with commercial trucks are always subject to heightened scrutiny because of the additional regulations that drivers of those vehicles have. We have seen many times in our firm numerous instances where drivers blatantly violate these regulations, which results in catastrophic consequences.    If you have been injured in an accident, call my office for a free consultation to find out what are your rights”.