Driver Seriously Hurt After Crash Along Florida’s Turnpike In Broward

A person was seriously hurt in a two-vehicle crash in Fort Lauderdale, officials said. Rescue crews work to free man trapped inside the vehicle.

The crash involving a BMW and a Mercedes Benz G-Class was attributed to failure to yield right of way.  Assistant Chief Jeff Levy, a spokesman for the Fort Lauderdale Fire Rescue Department, said the crash happened just along Florida’s Turnpike, north of Sunrise Boulevard. 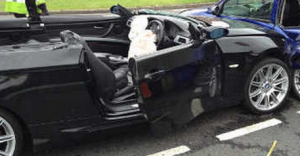 Fire rescue crews had to free the driver who was trapped inside the vehicle, Levy said. Photos from the scene show crews removed the roof of the car to get to the driver.  The driver, who was not identified, was airlifted to Broward Health Medical Center in Fort Lauderdale, Levy said. The person’s condition was not disclosed.

The other driver remains unhurt but his car was structurally damaged.

Accident attorney Jason Weisser of Schuler, Halvorson, Weisser, Zoeller and Overbeck responded to this unfortunate accident with a man injured:   “This is a tragic accident here in Ft. Lauderdale.  It is especially tragic when a pedestrian is hit by another car.  We hope for the families sake that it can be quickly discovered what the cause was.   We also hope that they speak to an experienced trial attorney.  Please be careful whenever you are driving a motorcycle, car, SUV or truck.  If you have been injured in an accident, call my office for a free consultation to find out what are your rights”.