Home  >  Uncategorized  >  Pedestrian Injured After Being Hit By A Motorcyclist in Port St. Lucie

Pedestrian Injured After Being Hit By A Motorcyclist in Port St. Lucie 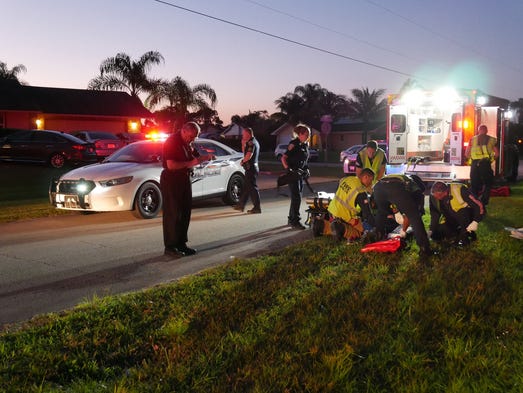 The pedestrian whose identity is yet to be released was waiting to cross a road congested with vehicles queuing at a traffic light stop. A driver indicated to him that he could walk cross in front of his stationary car. However, a speeding motorbike struck him as he did so, knocking him to the ground.

Paramedics examined the pedestrian and transported him to the hospital. The pedestrian was said to suffer a head injury, severe whiplash to the neck, possible cracked ribs and a broken leg, police said.

According to reports, the 66-year-old motorcyclist called 911 after the accident in the 1800 block of Southeast Crowberry Drive. However, he did not stay at the scene and left before either paramedics or police arrived, officers said.

Port St. Lucie police tracked him down and charged him with leaving the scene of an accident with serious injury. No bond has been set.

Accident attorney Jason Weisser of Schuler, Halvorson, Weisser, Zoeller and Overbeck responded to this unfortunate crash.   “This is an accident involving a motorcycle, which ultimately, resulted in a pedestrian suffering serious injuries. We wish the victim a speedy recovery and hope the investigators can quickly determine what caused the accident. Please be careful and obey the speed limits whenever you are driving a motorcycle, car, SUV or truck. We hope that all parties involved consult with an experienced trial lawyer. If you have been injured in an accident, call my office for a free consultation and find out what your rights are.