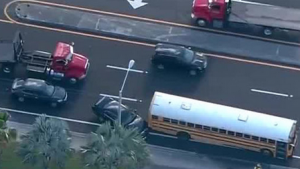 The bus with students on board was headed to South Tech., according to the police. The wreck caused heavy traffic delays blocking two lanes of traffic near Meadows Park.

Chopper 5 flew over the area and spotted a car hit the back of a private bus for South Tech. Boynton Beach Fire Rescue responded to the scene.  Boynton Beach police spokeswoman Stephanie Slater said children were on board at the time of the collision, but it is unclear if anyone was hurt.

Chopper 5 spotted another bus had arrived to transport the students to school following the wreck. There are traffic delays in Boynton Beach due to the school bus crash in Boynton Beach. Drivers are advised to use alternative routes.

Boynton Beach police is on the scene to investigate the crash and clear the wreck. It is unknown if speed or alcohol was a factor in the crash.

Accident attorney Jason Weisser of Schuler, Halvorson, Weisser, Zoeller and Overbeck responded to this unfortunate crash. “This is a serious school bus crash involving school-aged children. We wish the victims a speedy recovery and hope the investigators can quickly determine what caused the accident. Please be careful and obey the speed limits whenever you are driving a motorcycle, car, SUV or truck. We hope that all parties involved consult with an experienced trial lawyer. If you have been injured in an accident, call my office for a free consultation and find out what your rights are.”