Wilbert Janvier, 50, of Belle Glade was killed and seven others injured after a van overturned on Interstate 95 in Martin County, Florida Highway Patrol reports. 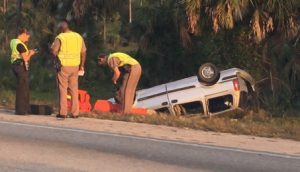 Wilbert Janvier was traveling southbound on Interstate 95 near Palm City when he suffered a tire blow out. Janvier lost control of the 2003 Chevy Venture, according to a crash report.

The van overturned, and Wilbert Janvier died at the scene as a result of fatal injuries suffered in the crash.

It unclear if the passengers were wearing seat belts prior to the crash, the report indicates.

Florida highway patrol is investigating the cause of the crash further.

Accident attorney Jason Weisser of Schuler, Halvorson, Weisser, Zoeller and Overbeck responded to this unfortunate crash. “This is a serious fatal accident involving a van, which ultimately, resulted in the death of one and serious injuries to seven. We wish the victim a speedy recovery and hope the investigators can quickly determine what caused the accident. Please be careful and obey the speed limits whenever you are driving a motorcycle, car, SUV or truck. We hope that all parties involved consult with an experienced trial lawyer. If you have been injured in an accident, call my office for a free consultation and find out what your rights are.”