Tanker Truck Crashes Into SUV, Leaks Fuel on I-95 in Palm Beach County

A tanker truck crashed into an SUV, leaking fuel on I-95 in Palm Beach County. 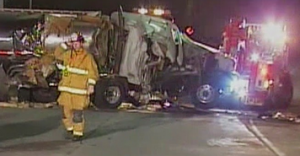 A speeding tractor truck driver lost control of his vehicle and crashed into an SUV on the highway. The SUV driver was trapped in his vehicle and sustained major injuries in the crash.

First emergency responders arrived at the site of the crash soon after the accident happened. The crash victim was extricated and transported to a regional medical center for treatment.

According to the Palm Beach County Sheriff’s Office, southbound traffic and all northbound traffic on I-95. Palm Beach Fire Rescue is on the scene. Deputies say traffic will be delayed for several hours until the fuel leak can be secured, and the vehicles can be up-righted.

The cause of the crash is under investigations. Palm Beach County Sheriff’s Office urges drivers to seek alternate routes on their commute.

“All lanes are closed; expect traffic delays of several hours until fuel leak can be secured and vehicles turned upright. This will be a long and protracted incident. Drivers should be very patient or seek alternative routes for northbound and southbound lanes,” PBCSO said.

Accident attorney Jason Weisser of Schuler, Halvorson, Weisser, Zoeller and Overbeck responded to this unfortunate crash. “This is a serious accident involving two vehicles, which ultimately, resulted in injuries and fuel spill. We wish the victim a speedy recovery and hope the investigators can quickly determine what caused the accident. Please be careful and obey the speed limits whenever you are driving a motorcycle, car, SUV or truck. We hope that all parties involved consult with an experienced trial lawyer. If you have been injured in an accident, call my office for a free consultation and find out what your rights are.”