Six people, including three minors, were injured in a three-vehicle crash at the intersection of Gatlin Blvd and Brescia St., St Lucie Fire Rescue reported. 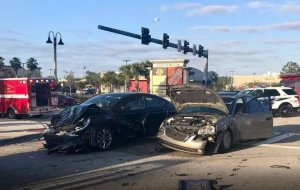 According to the Port St. Lucie Police, the crash happened at Gatlin Blvd. and Brescia St. and involved three vehicles.

First emergency responders arrived at the scene in Port St. Lucie shortly after the accident happened. Police found six people, including three minors, trapped in their vehicles. The victims were freed by the officers using extrication tools.

Officers say one female, two males, and three pediatric patients were taken to the hospital with non-life-threatening injuries. The accident involved three vehicles. What led to the crash is unknown at the time of filing thus report.

Port St Lucie Police Department and St Lucie Fire Rescue are at the scene of the motor vehicle accident at the intersection of Gatlin Blvd and Brescia St. to clear the wreckage. Investigation is ongoing to ascertain the cause of the crash.

Accident attorney Jason Weisser of Schuler, Halvorson, Weisser, Zoeller and Overbeck responded to this unfortunate crash. “This is a serious accident involving three vehicles, which ultimately, caused injuries to six people including three minors. We wish the victims a speedy recovery and hope the investigators can quickly determine what caused the accident. Please be careful and obey the speed limits whenever you are driving a motorcycle, car, SUV or truck. We hope that all parties involved consult with an experienced trial lawyer. If you have been injured in an accident, call my office for a free consultation and find out what your rights are.”