A female bicyclist was rushed to the hospital after she was hit by a vehicle, the St. Lucie County Fire District said. 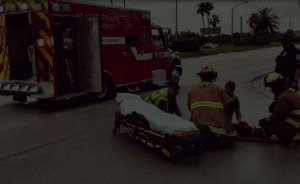 A female bicyclist was hospitalized after getting hit by a vehicle in Fort Pierce. The bicyclist was traveling along Okeechobee Road near Virginia Avenue when a vehicle struck her bicycle. She lost balance and fell off the motorcycle to the ground due to impact. She suffered traumatic injuries as a result of the severity of the crash.

First emergency responders arrived at the scene shortly after the vehicle vs. bike crash.  The female victim was taken to a local trauma hospital with serious injuries, according to fire officials.

An official statement issued by the St. Lucie County Fire District stated that, “E1, R25, and DC1 responded to a vehicle vs. bike at the Okeechobee Rd/Virginia Ave intersection. The female cyclist was transported to a local trauma hospital with serious injuries. It is unknown if the driver of the vehicle suffered any injuries.”

The crash which happened at the intersection of Okeechobee Road and Virginia Avenue has led to a snarl in traffic.  Accident scene personal have closed the area to conduct their investigation.  They are asking the public if anyone witnessed the bicycle accident to contact law enforcement.

Accident attorney Jason Weisser of Schuler, Halvorson, Weisser, Zoeller and Overbeck responded to this unfortunate crash. “This is a serious accident involving a female bicyclist, which ultimately, resulted in injuries. We wish the victim a speedy recovery and hope the investigators can quickly determine what caused the accident. Please be careful and obey the speed limits whenever you are driving a motorcycle, car, SUV or truck. We hope that all parties involved consult with an experienced trial lawyer. If you have been injured in an accident, call my office for a free consultation and find out what your rights are.”