1 Hospitalized After Rollover Crash On I-95 In Martin County

One person is injured after a rollover crash on southbound Interstate 95 southwest of Palm City, the Florida Highway Patrol said. 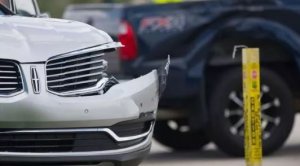 The crash which involved two vehicles occurred near the rest areas at mile marker 106, west of Florida’s Turnpike, according to FHP’s traffic monitoring website.

First emergency responders arrived at the scene shortly after the crash happened. The man was found trapped in his vehicle and freed with Jaws of life.

One person was injured in the crash, FHP spokesman Lt. Alvaro Feola said in a news release. His injuries were critical and life-threatening. The other driver who only suffered minor bruises was treated at the scene and released to go home by first emergency responders. The man who suffered critical injuries was transported to Lawnwood Regional Medical Center & Heart Institute in Fort Pierce, Feola said.

The cause of the crash is currently unknown but an eye witness alleged that one of the vehicles involved in the crash was speeding and ran a red light before ramming into a car. Investigations are ongoing.

Accident attorney Jason Weisser of Schuler, Halvorson, Weisser, Zoeller and Overbeck responded to this unfortunate crash. “This is a serious accident involving a Chrysler and a Sports Utility Vehicle, which ultimately, resulted in traumatic injuries. We wish the victim a speedy recovery and hope the investigators can quickly determine what caused the accident. Please be careful and obey the speed limits whenever you are driving a motorcycle, car, SUV or truck. We hope that all parties involved consult with an experienced trial lawyer. If you have been injured in an accident, call my office for a free consultation and find out what your rights are.”