Two people and a dog were injured when a Sports Utility Vehicle crashed into a FedEx Office store in Delray Beach, authorities say. 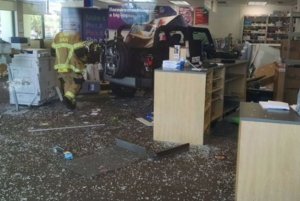 Delray Beach Fire Rescue said two people inside the store were hurt, but their injuries were not life-threatening. One of the victims was transported to the hospital in a stable condition, while the other victim was treated on the scene.

Delray Beach Fire rescue crews also said that they were able to free a customer’s dog that was trapped under the vehicle. The dog is expected to survive.

The driver, a 64-year-old man who crashed his Jeep into a Federal Express Store, has been cited for careless driving, Delray Beach police said.

It remained unclear what caused the crash at the time of filing this report. The driver who was uninjured in the crash told police that someone cut him off, but witnesses were unable to confirm that claim at this time, police said.

Delray Beach Police have not disclosed the identities of the injured victims and the Jeep driver. Investigations are ongoing.

Accident attorney Jason Weisser of Schuler, Halvorson, Weisser, Zoeller and Overbeck responded to this unfortunate crash. “This is a serious single-vehicle accident, which ultimately, resulted left two people and a dog injured. We wish the victims a speedy recovery and hope the investigators can quickly determine what caused the accident. Please be careful and obey the speed limits whenever you are driving a motorcycle, car, SUV or truck. We hope that all parties involved consult with an experienced trial lawyer. If you have been injured in an accident, call my office for a free consultation and find out what your rights are.”