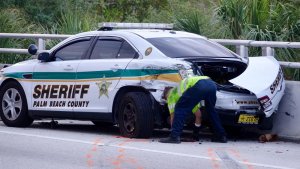 A Deputy Sheriff with the Palm Beach Sheriff’s Department was involved in a rear-end collision on Southern Boulevard. The accident occurred between Kirk Road and Congress Avenue.

According to the spokeswoman for the Palm Beach Sheriff’s Office, the deputy was driving his patrol vehicle in pursuit of a car headed eastbound on Southern Boulevard, when a Jeep rammed into his bumper from the rear.

“The Jeep which was cut off by another vehicle along Southern Boulevard, swerved into the lane of the patrol car, leading to a rear-end collision” authorities said. The patrol vehicle skidded towards the guard rail before coming to a stop.

Although no lives where lost in the accident which occurred by Palm Beach International Airport, but Palm Beach County Sheriff’s Deputy sustained minor injuries due to the deployment of the airbags in his patrol car, while the driver of the Jeep was left without any visible injuries.

The Palm Beach Sheriff’s Office is yet to identify the driver that initiated the turn that caused the accident. The driver of the vehicle that escaped the pursuit also remains unidentified.

Emergency first responders where also present at the scene of the accident to clear the debris and facilitate a free flow of traffic.

Accident attorney Jason Weisser of Schuler, Halvorson, Weisser, Zoeller and Overbeck responded to this unfortunate crash. “This is a serious accident involving two vehicles, which ultimately, resulted in injuries. We wish the Deputy a quick recovery and hope the investigators can quickly determine what caused the accident. Please be careful and obey the speed limits whenever you are driving a car, motorcycle, SUV or truck. We hope that all parties involved consult with an experienced trial lawyer. If you have been injured in an accident, call my office for a free consultation and find out what your rights are.”