A male driver fled on foot after crashing his PT Cruiser into a convenience store at a gas station in Port St. Lucie. 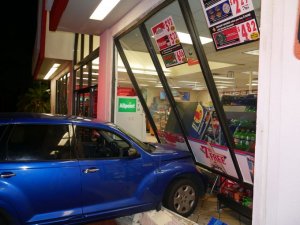 According to the police, a 34 year old customer sustained deep injuries when a PT cruiser crashed into the convenience store at a gas station located in the 100 block of Northwest Bayshore Boulevard in Port St. Lucie.

The PT Cruiser was driven by a 23 year old man who fled on foot after a failed attempt at removing his vehicle from the scene of the accident.  He was later apprehended by officers in the 400 block of Southwest Carmelite Street. “He was sweating profusely, smelled of alcohol and did not know where he was”, police said.

The customer who was taken to the hospital for treatment, was said to be buying groceries at the store when the incident happened. He was cut in the face by pieces of glass from a shattered window as a result of the crash impact. The customer sustained non life threatening injuries and is in a stable condition.

According to an arrest affidavit the driver of the PT Cruiser asked to be taken to the hospital where he shouted profanities at the staff and apologized afterwards. After failing a sobriety test and registering a blood alcohol level of over twice the legal limit, he was charged with a DUI, property damage, leaving the scene of a crash involving property damage and resisting arrest.

Accident attorney Jason Weisser of Schuler, Halvorson, Weisser, Zoeller and Overbeck responded to this unfortunate crash. “This is a serious accident involving one vehicle, which ultimately, resulted in injuries. We wish the victims a quick recovery. Please be careful and obey the speed limits whenever you are driving a car, motorcycle, SUV or truck. We hope that all parties involved consult with an experienced trial lawyer. If you have been injured in an accident, call my office for a free consultation and find out what your rights are.”