Two people were fatally injured when an illegal drag race led to a crash on East Palm Beach Road in Belle Glade. 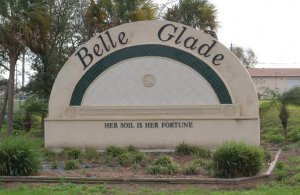 The Florida Highway Patrol is investigating a crash that led to the death of two people in Belle Glade. According a police spokesman, the 22 year old driver of a Dodge Charger and the 25 year old driver of a 2014 Mustang GT were engaged in an illegal drag race on East Palm Beach Road.

The 40 year old driver of a 2010 Toyota Matrix was on the eastbound lane of the road approaching the Mustang GT head on.  The two cars collided with each other driving at a high rate of speed.

The driver of the Toyota Matrix was seriously injured in the crash which totaled his car. He was airlifted to the hospital in critical condition. According to medical reports, the driver sustained multiple fractures and internal injuries from the crash and later died at the hospital.

Both cars were badly damaged in the crash beyond recognition. Emergency services had to use the Jaws of life to pry open the Mustang GT before gaining access to the 25 year old driver of the car. He sustained serious injuries and was taken to the hospital for treatment. He also died at the hospital.

Investigations are still ongoing, the Florida Highway Patrol is handling a full investigation into the cause of the crash. In the mean time, the driver of the Dodge Charger has been arrested and is in police custody.

Accident attorney Jason Weisser of Schuler, Halvorson, Weisser, Zoeller and Overbeck responded to this unfortunate crash. “This is a serious accident involving two vehicles, which ultimately sent two people to the hospital. We wish the victims a quick recovery and hope the investigators can quickly determine what caused the accident. Please be careful and obey the speed limits whenever you are driving a car, motorcycle, SUV, or truck. We hope that all parties involved consult with an experienced trial lawyer. If you have been injured in an accident, call my office for a free consultation and find out what your rights are.”