A 43-year old man broke his back and neck in a horrific car crash on Sunrise Boulevard after he was hit by a speeding vehicle, Broward County Sheriff’s Office report. 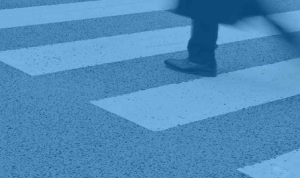 The crash was reported near the intersection of Flamingo Road and Griffin Road. A man was crossing the road when a car traveling on Flamingo Road ran a traffic light and struck him. He sustained severe injuries as a result of the crash.

First emergency responders arrived shortly after the crash occurred. The victim was transported to a local hospital but he died after arrival, authorities report.

Broward Sheriff Fire Rescue Battalion Chief Michael Kane said only one vehicle was involved in the crash and the cause of the accident is unclear. Broward Sheriff Office detectives are investigating.

Sunrise Boulevard was shut down in both northbound and southbound directions after crash. Drivers are advised to take alternative routes. The identities of both the driver and the pedestrian were not immediately released.

Accident attorney Jason Weisser of Schuler, Halvorson, Weisser, Zoeller and Overbeck responded to this unfortunate crash. “This is a serious accident involving two vehicles, which ultimately, resulted in the death of a pedestian. We hope the investigators can quickly determine what caused the accident so that the family and friends of the victim can get justice and have a closure. Please be careful and obey the speed limits whenever you are driving a motorcycle, car, SUV or truck. We hope that all parties involved consult with an experienced trial lawyer. If you have been injured in an accident, call my office for a free consultation and find out what your rights are.”