WPTV is mourning the loss of a beloved former reporter and anchor who died from injuries sustained in a car crash in West Palm Beach. 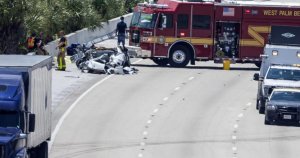 Rachele Scholes, 55, of Lake Worth, was the passenger a 2007 Harley Davidson motorcycle that was traveling south on South Dixie Highway near the intersection of Churchill Road.

Police said a 2003 Ford Taurus, which was heading north, turned left in front of the motorcycle, violating the motorcycle’s right of way.

The two vehicles collided, ejecting both the driver of the motorcycle and Scholes.

Scholes was a former reporter and news anchor at WPTV from 1986 to 1999 where she covered breaking news, criminal and civil court cases and produced in-depth specials.

Scholes was the recipient of the Associated Press Award for Outstanding Individual Achievement.

Following her time with WPTV she worked in media and public relations, spent two years as a morning radio co-host on WEAT Sunny 104.3, was a real estate agent, and was most recently the office administrator of Lakeside Presbyterian Church.

A longtime WPTV anchor posted on Facebook, “Words cannot express the sadness and shock I, and so many of us at WPTV feel after learning of the death of our dear friend.”

She said. she and Scholes attended the University of Florida together and she will remember her as a devoted mom to her 16-year-old son.