The driver of a stolen car is accused of causing a fiery two-car crash that killed a 21-year-old woman and caused a 17-year-old boy to suffer a spinal fracture. 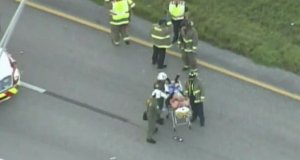 The 19-year old is being held in the St. Lucie County Jail on $100,000 bond after his first court appearance. The crash killed a 21-year old passenger of another car.

The 19-year old was driving a 2016 Toyota Camry reported stolen from Lakewood Park. A witness told police that they saw the car flying around the corner of East 150th Street and Port St. Lucie Avenue, according to police.

The 19-year old sped through a stop sign driving south on East 143rd Street. He smashed into a 27-year old man’s 2009 Infiniti G37 that was driving eastbound. The 27-year old did not have a stop sign the intersection, court records say.

St. Lucie County police officers on patrol spotted smoke coming from the area and initially thought a house was on fire, according to police reports.

The officers saw the crash and heard someone screaming from inside’s the car of the 19-year old, according to police reports. One officer pulled the 19-year old from the car and dragged him onto a nearby porch, police reports say. Another officer checked the 27-year old man’s car. The man was unconscious and his 21-year-old female passenger was severely injured.  She was pronounced dead at the scene.

Officers ran back to the car of the 19-year old after it burst into flames and after seeing the 17-year-old boy was trapped in the backseat, police reports say.

An officer unsuccessfully tried to break a side window. Another officer broke the back windshield, grabbed a garden hose from a nearby home and tried to extinguish the fire, according to police reports.

The car became engulfed in flames. An officer cut off the teen’s seatbelt and two officers pulled him from the car, according to police reports.

Meanwhile, the car of the 27-year old caught fire while he was still trapped in the front seat. Other officers and firefighters arrived, put the fire out and pulled him from the front seat, according to police.

They were all taken to a nearby hospital, the post reports.