A pedestrian accident in Wellington left a woman dead. The violent aftermath of the crash left the driver of the flatbed tow truck in critical condition and another man in police custody. 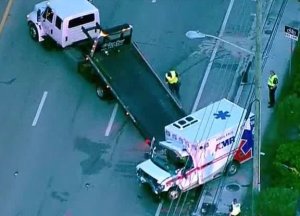 Authorities say that after the woman was struck by the truck, a man with her engaged in an altercation with the tow truck driver, stabbing him multiple times in the abdomen,the post reports.

While police have not confirmed the relationship between the man and the woman, the man yelled, “You killed my mom,” while allegedly attacking the tow truck driver, the post reports.

The accident happened as the woman and man tried to cross Interstate 95 at Riviera Beach, according to reports. One witness tells the post, “The son went crazy” after the accident, adding that the man chased the driver around the truck while stabbing him. “I didn’t see her. I didn’t see her,” the driver reportedly said during the alleged attack.

The woman was pronounced dead at the scene. The driver was taken to a hospital in critical condition. And the man was arrested. An investigation is ongoing.