A child was killed and at least 45 people were injured when a charter bus carrying youth football players from Boca Raton rolled off an interstate and overturned in Palm Beach County, authorities said. 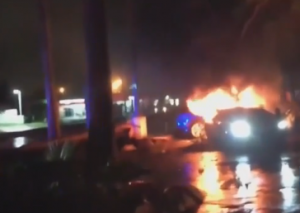 Palm Beach County Police said the bus crashed along Interstate 95 near Wellington, about 25 miles (40 kilometers) southwest of Broward County. Police said most of the injured were children and that they were taken to hospitals in Delray Beach.

The elementary-school-age children in Royal Palm Beach were returning home after playing in a football tournament, according to the Florida Highway Patrol officials.

One of half a dozen adults on the bus, said the players had been playing in all-star games. He told The Post that the bus swerved then flipped before landing on its side at the foot of an embankment.

“When the bus started flipping, the kids were hollering, and we were trying to calm them down,” he said in an interview from Delray Hospital, where he was treated for injuries to his right side and leg. “I was holding on, trying to make sure I didn’t get thrown out.”

Teams and coaches affiliated have not returned phone calls or emails giving comments.

At a news conference in Boca Raton, a Florida Highway Patrol Lieutenant said a third grader from the school died in the crash. He did not reveal the child’s name.