A 30-year old Fort Pierce Woman wasn’t supposed to be driving the day she rammed into the back of a SUV, causing an accident that claimed the lives of two young sisters, Florida Highway Patrol officials said. 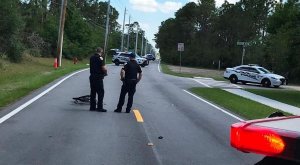 “Her license was suspended,” a Florida Highway Patrol spokesman said.

According to two sources, the 30-year old’s license had been suspended because of a high number of traffic violations. She had also been arrested once for driving with a suspended license.

She has been charged with two counts of manslaughter, four counts of endangering a child, one count of aggravated assault and one count of tampering with evidence in connection with a car accident that a killed five-year-old girl and a nine-month-old toddler and injuring their mother.

The 30-year old is accused of texting and using Facebook while driving.

The mother of the victims has reportedly been released from the hospital and is continuing to recover at home.

A memorial service for the girls killed in the crash will be held at Wellington Church of Palm Beach County.

The 30-year old was later released from the Palm Beach County Jail after posting a $160,000 bond.

Accident attorney Jason Weisser of Schuler, Halvorson, Weisser, Zoeller and Overbeck responded to this unfortunate crash. “This is a serious accident resulting in two fatalities. We hope the investigators can quickly determine what caused the accident. Please be careful and obey the speed limits whenever you are driving a motorcycle, car, SUV or truck. We hope that all parties involved consult with an experienced trial lawyer. If you have been injured in an accident, call my office for a free consultation and find out what your rights are.”