A car dealership mechanic crashed into a motorcycle with three riders and killed two of them, according to Delray Beach police and the Florida Highway Patrol. 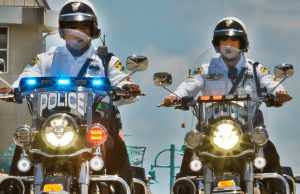 The mechanic was test-driving a 2002 Lexus sedan.  Witnesses told police he was traveling at a high rate of speed.

Witnesses said, he was traveling northbound in the 2000 block of South Dixie Highway and swerved to avoid another car. The man crossed into the southbound lanes and then into some soft dirt on the west side of the roadway. When he drove back onto Dixie Highway, he collided with the Honda Goldwing motorcycle on which two women were riding.

Police said, the two riders were transported to Delray Medical Center where the women were later pronounced dead.

The driver of the Lexus, who works as a mechanic about 8 blocks south of the crash site, was not injured.

Florida Highway Patrol officials say the investigation is ongoing and charges are pending.

DBPD traffic homicide is still investigating the cause of the fatal crash in the 2000 block of S. Dixie Hwy.