The motorcycle passenger in a car crash is on life support, Palm Beach County police and the Florida Highway Patrol officials said. 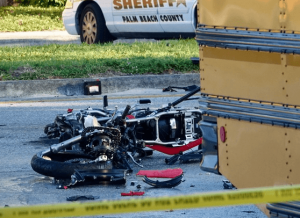 A 2007 Suzuki motorcycle carrying two people was southbound at South Dixie Highway and Churchill Road about nine blocks north of Forest Hill Boulevard when a northbound 2003 Ford Taurus turned left in front of it, violating its right of way, police and the Florida Highway Patrol said. The motorcycle struck the right front of the Ford.

The driver of the motorcycle suffered serious life-threatening injuries and the driver of the Ford and one of his passengers were taken to a nearby hospital, police and the Florida Highway Patrol said.

The police statement doesn’t identify any of the passengers and doesn’t say to what hospital the two motorcyclists were taken. It also did not say if any charges have been filed. Although it is the Florida Highway Patrol that claimed it is still trying to discover if alcohol or drugs had a part to play in the Palm Beach County car crash.

Anyone with information should contact West Palm Beach police.