St. Lucie County Man Injured After Being Struck By Vehicle

A St. Lucie County Department of Transportation electrician was critically injured when a driver hit him while he was working on a bridge in St. Lucie County, according to police and witnesses. 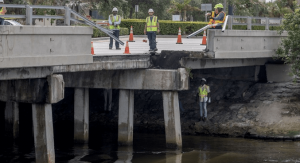 The 43-year old man was exiting a vehicle parked off to the side of the road when the driver lost control of his car and slammed into him, DOT officials said. The man was listed in critical condition at Delray Medical Center, police said.

“This is such a sudden and horrible tragedy,” a FHP officer said at a press conference on the Upper West Side of St. Lucie County.

The victim is a hard-working man who had been with the DOT for several years, according to a FHP officer.

The Department Of Transportation said, it was very shocked and saddened by the current condition of the man.

Just before the crash, the driver had sped across two lanes of traffic, moving from the left-most lane to the right lane, according to a witness.

“He came up from the left lane and cut in front of me really fast,” the 65-year-old man said. The victim was on the road shoulder approaching the bridge for routine maintenance when the vehicle hit him, according to DOT. The 65-year-old driver was taken to the hospital with head and neck pain, police said.

Accident attorney Jason Weisser of Schuler, Halvorson, Weisser, Zoeller and Overbeck responded to this unfortunate crash. “This is a serious accident resulting in a injuries. We hope the investigators can quickly determine what caused the accident. Please be careful and obey the speed limits whenever you are driving a motorcycle, car, SUV or truck. We hope that all parties involved consult with an experienced trial lawyer. If you have been injured in an accident, call my office for a free consultation and find out what your rights are.”