INDIAN RIVER COUNTY — A Florida Highway Patrol official said a dump truck crashed into several vehicles at an intersection during on State Road 60. 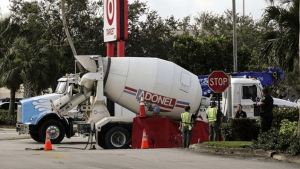 “Around 7 cars” altogether were involved in the crash in the eastbound lanes of S.R. 60 at 82nd Avenue, according to a Lieutenant of the Florida Highway Patrol.

He said the eastbound lanes and access to the intersection opened again over four hours after the crash had occurred.

The crash involved injuries and was reported at State Road 60.

A man was transported to Lawnwood Regional Hospital & Heart Institute in serious condition and a woman was taken to Cleveland Clinic Indian River Hospital with less severe injuries, according to Indian River Fire Rescue and the Florida Highway Patrol Department.

Some motorists were using a vacant lot to get around the crash scene.

The Treasure Coast was under a dense fog advisory at the time of the crash, with fog limiting visibility in some areas to about 400 yards, according to the National Weather Service. Anyone with additional information concerning the car crash is asked to contact the relevant authorities concerned.