When A two-car crash in Boyton Beach has left multiple people injured.

The crash site is near Gateway Boulevard in Boyton Beach.

A Toyota Corolla skidded and crashed into the back white work van.  This happened on Gateway Boulevard near Boyton Beach. According to reports, several people sustained injuries in the crash.   Fortunately, no one died in the accident. 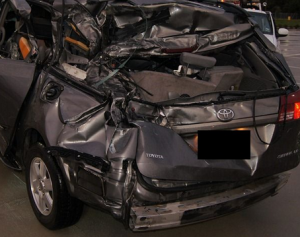 This is a vehicle crash with injuries that has blocked the road, the Palm Beach County Sheriff’s office reports.

Vehicles on this route are pulling to the roadside to allow authorities work. Some are pulling into Shell gas station and Marios’ parking lot. Others are making a detour through a side street –  West Sandpiper Drive.

The traffic jam has extended to West Sandpiper Drive.

To avoid delays, we advise that you avoid this route and take alternate routes. Other alternate routes to use to get around this accident is to take Royal Manor Boulevard or Lawrence Road.