A two-car crash in Broward County involving a football player has left a person hospitalized according to the authorities. 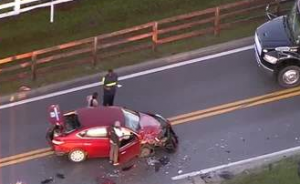 Police arrested a Broward County football player on charges of driving under the influence and leaving the scene of an accident after a crash. The 20-year old, was booked into a county jail. The offensive lineman has seen no playing time this season and did not travel for the next game.

FHP officers were called to the crash near Coconut Creek, said a FHP spokeswoman. The victim, 19, told officers that the driver of a white Chevrolet Silverado was “doing doughnuts” in the roadway before striking his vehicle, she said.

“The suspect asked the victim not to contact the police,” she said.

The victim provided police with the tag number, she said. Officers stopped the 19-year old a few miles away from the crime scene. He received minor injuries, but refused medical treatment.

“We are very disappointed any time a player makes a choice that leads to this kind of behavior,” he said. “We are still in the process of gathering all of the details on the situation, and we will evaluate what we need to do in terms of appropriate discipline as we move forward.” An FHP spokeswoman said.

Accident attorney Jason Weisser of Schuler, Halvorson, Weisser, Zoeller and Overbeck responded to this unfortunate crash. “This is a serious two-car accident involving a football player, which ultimately, resulted in injuries. We wish the victim a speedy recovery and hope the investigators can quickly determine what caused the accident. Please be careful and obey the speed limits whenever you are driving a motorcycle, car, SUV or truck. We hope that all parties involved consult with an experienced trial lawyer. If you have been injured in an accident, call my office for a free consultation and find out what your rights are.”