The crash involves a Ford F250 and a Honda Civic. 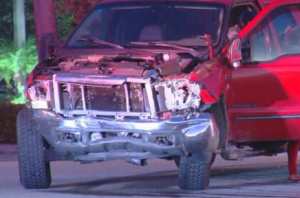 According to the West Palm Beach Police Department, one person was injured in the crash. The person was transported to a local hospital.

Investigators are looking into whether alcohol played a role in the crash.

The Palm Beach County Sheriff’s Office says a Ford F-250 rear-ended the Honda Civic car, sending it off the road. It crashed, injuring its driver.

The driver of the Ford, a 27-year-old man, suffered minor injuries but declined treatment.

This is a vehicle crash with injuries that has blocked the SB Australian Avenue at Worthington Road in West Palm Beach.

Vehicles on this route are pulling to the roadside to allow crews work.  Your best alternative routes are to take Congress Avenue or South Dixie Highway to avoid the traffic tie-ups.

Attorney Jason Weisser of Schuler, Halvorson, Weisser, Zoeller and Overbeck comments on this two car accident in West Palm Beach:  “This is a serious accident that unfortunately had has sent a victim to the hospital with injuries.  It appears from the stories that driving impaired was a possible contributor to the crash.  It is never acceptable to get behind the wheel when you are impaired so please don’t.   We hope that the victim retains proper legal council to represent them.  If you’ve been injured in an accident, make sure you are properly represented by an experienced trial accident attorney.”