A man from Lake Worth was killed and his passenger seriously injured in a crash involving a Nissan Sentra. The car crash hampered traffic at the Southern Boulevard exit ramp of Interstate 95 in West Palm Beach.

The driver, 68, was pronounced dead at the scene, according to the Florida Highway Patrol. First emergency responders arrived at the site of the crash soon after the accident happened. His 61-year-old passenger, also from Lake Worth, was transported to St. Mary’s Center in West Palm Beach in critical condition.

The driver of the Nissan Sentra was driving east on Southern Boulevard when he stopped in the left turn lane at the intersection of I-95, according to a report. 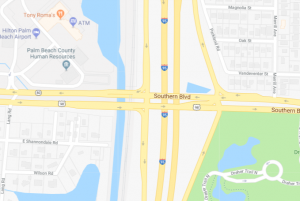 The second driver, a 25-year-old man from New York, was driving southbound in a Hyundai Genesis on the Southern Boulevard ramp. He “failed to negotiate the turn and crossed the westbound lanes and struck the left side” of the Nissan Sentra, the report states.

This is a vehicle crash with injuries and the cause of the crash is being investigated, said the Federal Highway Patrol.

The left lane of Southern Blvd is blocked at this time.  The delay of traffic on this route is due to the severity of the crash. Vehicles on this route are pulling to the roadside to allow crews to work to clear the crash scene. It is best to exit I-95 using Belvedere Road from the North and Forest Hill Blvd from the South.

Attorney Jason Weisser of Schuler, Halvorson, Weisser, Zoeller and Overbeck responded to this unfortunate accident in West Palm Beach:   “This is a tragic accident that resulted in a death to one man.  The crash also caused serious injuries to his passenger.  Unfortunately it appears it was caused by the driver of the Nissan Sentra.  Please be careful whenever you are driving a motorcycle, car, SUV or truck.  If you have been injured in an accident, call my office for a free consultation to find out what are your rights”.

The post Crash On I-95 Near Southern Blvd Leaves One Dead In West Palm Beach appeared first on Traffic Center.