Driver Crashes Into A Minivan In Delray Killing Four Tourists

A man crashed into a minivan in Delray Beach killing all four passengers and recently turned himself in after the police had issued a warrant for his arrest, according to the Delray Beach Police Department. 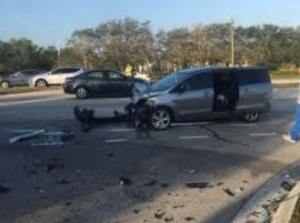 A 21-year-old man from Fort Lauderdale has been arrested on four counts of a vehicular homicide, DUI with injury, property damage and four counts of manslaughter.

Police reported that he was driving his 2010 Chevy Silverado above 100 mph when he crashed into the back of a Dodge Caravan in the southbound lane of the Federal Highway in Delray Beach.  His 42-year old sister, a 50-year-old man, and his sister’s two young children were passengers in the Silverado. All four passengers were killed in the crash. Investigators reported that he did not hit the brakes prior to the crash, police said.

Police said his blood test had revealed that the presence of Difluoroethane, when inhaled, creates mind-altering effects.  The driver and another man had purchased about 10 cans of Dust-Off, which contains difluoroethane, at a Boynton Beach Walmart about four hours prior to the crash, according to a surveillance tape viewed by police.

Accident attorney Jason Weisser of Schuler, Halvorson, Weisser, Zoeller and Overbeck responded to this unfortunate crash. “This is a serious accident involving two vehicles, which ultimately, resulted in the death of four people. We hope the investigators can quickly determine what caused the accident so that the family and friends of the victims can get justice and have a closure. Please be careful and obey the speed limits whenever you are driving a motorcycle, car, SUV or truck. We hope that all parties involved consult with an experienced trial lawyer. If you have been injured in an accident, call my office for a free consultation and find out what your rights are.”