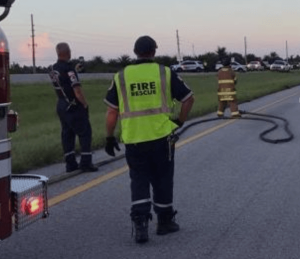 A St. Lucie County family of three were critically injured when an allegedly drunk driver slammed into their truck, police said.

A 51-year-old man, his 48-year-old wife, and their 11-year-old son were injured when their Chevy pickup was plowed into by a Mercedes Benz as they were attempting to make a left turn onto River Park near Fort Pierce.

The Mercedes Benz, driven by a 62-year-old man, was traveling south on River Park when it hit the truck, causing it to overturn, Florida Highway Patrol officials said.

Witnesses told police authorities that the victims had a green light as they rounded the corner, while the driver of the Benz ran a red light.

There are witness accounts that the Mercedes Benz driver was traveling at a high rate of speed, an FHP official told members of the press.

The victims were taken to a hospital in St. Lucie County by paramedics at the scene.

The Mercedes Benz driver was taken to Delray Medical Center where he underwent surgery and remains in serious condition. He was arrested and charged with driving while intoxicated, but hasn’t been arraigned yet, police said.