Fellsmere Police Department is investigating a fatal crash that killed a bicycle rider near Vero Beach.

The fatal accident happened at County Road 512, just east of Broadway Street. Traffic in the area is heavy due to the crash on I-95. Officials are advising drivers to avoid the area. 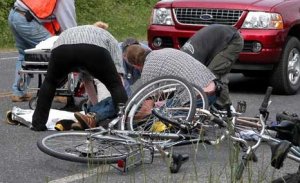 An official statement released by FPD states that officers from the Fellsmere Police Department and Indian River County Sheriff’s Office are on the scene of a fatal crash on CR-512, just east of Broadway St. involving a bicyclist. There’s heavy traffic on CR-512 because of another fatal crash on I-95 at SR-60. Follow bypass signs in Fellsmere.

The identities of the victims are yet to be disclosed by the authorities.

The two fatal crashes snarled traffic in Fellsmere, west of Vero Beach. Northbound lanes on I-95 are closed just south of the Vero Beach exit after the multi-vehicle crash blocked them in Indian River County, authorities said. Additionally, the on-ramp to I-95 northbound at Exit 147 was closed for emergency vehicles.

Traffic has been diverted onto Indrio Road in St Lucie. Please avoid the area and use alternative routes if possible. The Florida Highway Patrol is investigating both crashes.

Accident attorney Jason Weisser of Schuler, Halvorson, Weisser, Zoeller and Overbeck responded to this unfortunate crash:   “This is serious accident that left on bicycle rider dead in west Vero Beach.   We hope for everyone’s sake that it can be quickly discovered what the cause was.  Please be careful and obey the speed limits whenever you are driving a motorcycle, car, SUV or truck. This is especially true when there are children in the area.  We hope that all parties involved consult with an experienced trial lawyer.  If you have been injured in an accident, call my office for a free consultation to find out what are your rights”.