A family vacationing in Delray Beach was killed when a speeding pickup slammed into the back of their van, Delray Beach police said. 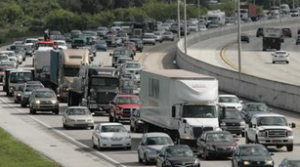 A 50-year-old man, his sister and her two children were dead by the time rescue crews reached them in their crushed minivan. A Chevy Silverado slammed into the back of the family’s 2018 Dodge Caravan at a very high rate of speed on South Federal Highway, police said.

Witnesses estimated the truck, driven by a 21-year-old, was going about 100 mph when it swerved to avoid traffic ahead of it and rear-ended the minivan that was waiting to turn into the Tropic Isle community on La-Mat Avenue. Police said the family spent the day in Deerfield Beach and was returning to the home they rented on Florida Boulevard. The truck and the van crossed the median into the northbound lanes and collided with a Buick Encore. The van became stuck between the truck and the Encore.

Delray Beach Fire Rescue authorities had to separate the vehicles before they could reach the four people inside the van. All were pronounced dead at the scene.

The driver of the truck was taken to Delray Medical Center with non-life threatening injuries which included broken bones in his face, a fractured clavicle and bruised lungs.

“I was in a tragic car crash and I’m lucky to have been spared a second chance at life,” he wrote. The two people in the Buick Encore sustained minor injuries, Delray Beach police said.

Accident attorney Jason Weisser of Schuler, Halvorson, Weisser, Zoeller and Overbeck responded to this unfortunate crash. “This is a fatal accident which ultimately resulted in the death of two adults and two children. We hope the investigators can quickly determine what caused the accident. Please be careful and obey the speed limits whenever you are driving a motorcycle, car, SUV or truck. We hope that all parties involved consult with an experienced trial lawyer. If you have been injured in an accident, call my office for a free consultation and find out what your rights are.”