The wreck took place at Southwest St. Lucie West and Southwest California Boulevards near Walmart Supercenter and Starbucks. First emergency responders arrived at the site of the crash soon after the accident happened and the victims were transported to Hospital for treatment. 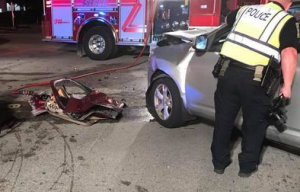 According to the police, the fatal crash at SW St. Lucie West Blvd and SW California Blvd is still being investigated.

This route is partially blocked `due to the severity of the crash, causing traffic delays. Vehicles are seen pulling into nearby Starbucks and Walmart parking lots. It is best to use alternative routes such as SW Heatherwood Blvd and SW Cashmere Blvd.

Port St. Lucie attorney Jason Weisser of Schuler, Halvorson, Weisser, Zoeller and Overbeck responded to this unfortunate accident with a death of one woman:   “This is a tragic accident here in St. Lucie County.  We hope for the families sake that it can be quickly discovered what the cause was.  Please be careful whenever you are driving a motorcycle, car, SUV or truck. This is especially true when you are transporting children in your vehicle.  If you have been injured in an accident, call my office for a free consultation to find out what are your rights”.