Home > Blog > Uncategorized > I-95 Southbound Has 2 Left Lanes Closed Because A Tractor Trailer Is Laying On Its Side After Accident
Practice Areas
Locations
West Palm Beach, FL (Primary Location)

Avoid I-95 in Jupiter because of a tractor trailer accident with one injury.

The two left lanes of I-95 southbound are blocked near Donald Ross Road at mile marker 86 due to a tractor trailer crash.  Florida Highway Patrol and the Palm Beach Fire Rescue all responded to the scene. 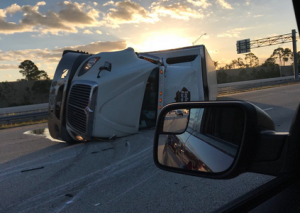 Florida Highway Patrol took control and is doing its best to keep traffic moving through just one lane that is open but backups stretch for 5 miles up I-95.

The crash left the tractor trailer on its side and facing the wrong direction.  At this time it was reported that there was one injury but details are unknown.

Use Alternate A1A or the Florida Turnpike for a faster route if you are traveling southbound through northern Palm Beach County.

The post I-95 Southbound Has 2 Left Lanes Closed Because A Tractor Trailer Is Laying On Its Side After Accident appeared first on Traffic Center.