According to officials, Michael “Mikey” Arana, who was driving a Chevrolet Tahoe  SUV, slammed into the back of a police cruiser along the westbound lanes of Kendall Drive near 152nd Avenue.

“A car struck them from behind at a very high rate of speed,” said Miami-Dade Police Detective Lee Cowart, describing the crash. 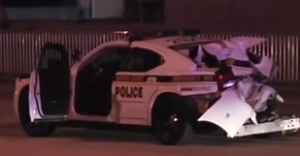 Following the accident, the driver of the SUV did not stop.   Officials said he kept going, but after a short amount of time, he was eventually stopped by police along Southwest 88th Street and 157th Avenue.  Mr. Arana refused to take a field sobriety test and was charged with leaving the scene of the accident.  Other charges are pending.

“It was a violent crash,” said Cowart. “Both vehicles were heavily damaged.”

The crash was so serious and the injuries so severe that one of the officers was airlifted by helicopter to Kendall Regional Medical Center.  He was admitted because of back injuries he received when his car was rear-ended.   The other officer suffered a cut to his head.

According to Miami-Dade Police, both officers involved are now back home recovering with family.

Miami-Dade Police were directing traffic around the scene on Kendell Driver for over 2 hours while the injured were helped and the cars were towed.

Justin Bieber was not in the SUV driven by his bodyguard at the time of the crash.

Attorney Jason Weisser of Schuler, Halvorson, Weisser, Zoeller and Overbeck comments on this rear-end, hit and run accident in Miami.  “This is a serious accident that appears to have been caused by a man that was impaired while driving.  I know many Miami-Dade Police officers from my time as an Assistant States Attorney in Miami and this is very unfortunate.  We hope that these two officers seek proper representation so that they can receive their due compensation.   If you’ve been injured in an accident, make sure you are properly represented by an experienced trial accident attorney.”