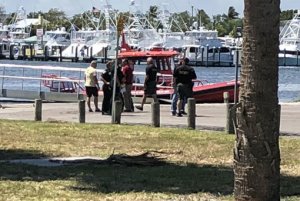 A driver failed to negotiate a bend and crossed into another lane. He violently crashed head-on into another woman’s vehicle. The vehicle spun out and while she attempted to regain control of the car, it swerved left and crashed into the canal, deputies say. The front of the other car suffered considerable structural damage.

First emergency responders arrived shortly after the crash happened. A bystander and a PBSO Deputy were able to pull the woman out of the submerged car, according to fire officials. Rescue divers were deployed to search for a possible second occupant, but it was later determined the woman was the only person in the car.

She was taken to JFK Medical Center for treatment of a near drowning and is in critical condition.

Palm Beach County deputies say the car went into the canal after a crash and the eastbound lanes of Hypoluxo are shut down.

Deputies say she did have a seat belt on.

Accident attorney Jason Weisser of Schuler, Halvorson, Weisser, Zoeller and Overbeck responded to this unfortunate crash. “This is a serious accident involving two vehicles, which ultimately, resulted in landing a woman into a canal. We hope the investigators can quickly determine what caused the accident and make charges. Please be careful and obey the speed limits whenever you are driving a motorcycle, car, SUV or truck. We hope that all parties involved consult with an experienced trial lawyer. If you have been injured in an accident, call my office for a free consultation and find out what your rights are.”